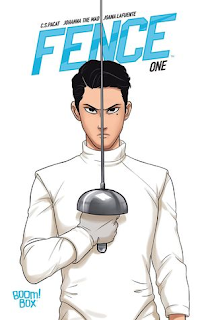 Sixteen-year-old Nicholas Cox is an outsider to the competitive fencing world. Filled with raw talent but lacking proper training, he signs up for a competition that puts him head-to-head with fencing prodigy Seiji Katayama...and on the road to the elite all-boys school Kings Row. A chance at a real team and a place to belong awaits him—if he can make the cut!

I've been eyeing this for a while. I've read the author's M/M Fantasy Romance series Captive Prince and fell in love with it so I was hoping this would be just as good. It's only short being the first instalment but it had potential to be something quite good. The artwork was great and the storyline has me intrigued.

It follows Nicholas Cox, illegitimate son to a fencing star who has followed in his dad's footsteps and likes fencing. He enters a tournament and is up against fencing prodigy Seiji Katayama and fails miserably. Shortly afterwards he get's into a prestigious all boy's school where he hopes to get better with his fencing and hopefully get on the team.

I am intrigued what's going to end up happening with this series both with Nicholas and his fencing dreams and knowing the author writes M/M Romances.