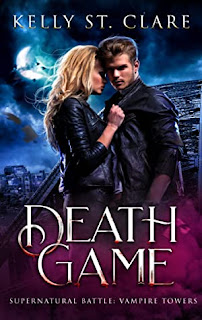 The walls are closing in as I balance duty to grandmother’s memory with my impossible feelings for Kyros. Then there’s the freakin’ human-vampire hybrid thing to deal with.

The problem is, I’m no longer willing to lose the person I’ve gambled against from the start.

Our fates hinge on a single roll of the dice, and one wrong move could collapse the tower of cards I’ve painstakingly built.

If that happens, I’ll lose more than I ever bargained for.

This is the final book and Basi has some serious issues to resolve. She gave the Fyrlia's information that could start the end game and leave Kyros and his family in jeopardy so she has to fix that. Then there's what she promised to do for the Indebted. There's also the issue of trying to stay true to her grandmother's memory.

Once again I don't want to spoil it by going into detail but whoa, this had a lot going on.

I enjoyed reading more of the growing connection between Basi and Kyros as they completed more blood exchanges. It was about time that they finally just told each other the truth and worked through the issues from their short past together. They really were super cute and extremely hot at times. I loved them.

As for the game between the two clans of vampires. I'm so glad Basi was able to come up with her brilliant idea to thwart the bad side from winning as, like Basilia, I'd grown to like pretty much all of Kyros' family.

At the back of the book, the author had a note saying she was working on a werewolf supernatural battle series too and I think I'll read that too when it's released.
at Tuesday, June 30, 2020