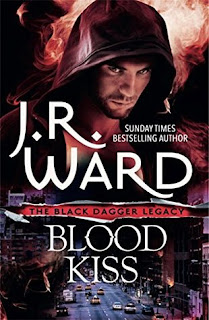 Paradise, blooded daughter of the king's First Advisor, is ready to break free from the restrictive life of an aristocratic female. Her strategy? Join the Black Dagger Brotherhood's training center program and learn to fight for herself, think for herself... be herself. It's a good plan, until everything goes wrong. The schooling is unfathomably difficult, the other recruits feel more like enemies than allies, and it's very clear that the Brother in charge, Butch O'Neal, a.k.a. the Dhestroyer, is having serious problems in his own life.

I read my first Black Dagger Brotherhood book back in 2010, I think, and fell in love with this group of warriors. I have books 1-12 in paperback and they sit proudly on my bookshelf, as shown below: 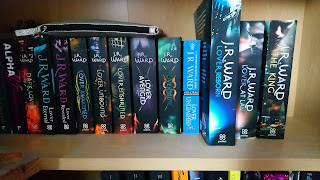 I guess it's not fair to have favourites but two of them always stick in my head: Rhage and Vishous, though all the guys are memorable. The King, Wrath's second book in the series took me a while to read so I gave up on the series for a while, though I have been buying the rest of the books in this series as Kindle books.
This spin off series - Black Dagger Legacy - is about the original guys finding new recruits who they will train so they can help them take on the lessers and any other threats to their population.

This one follows Paradise, a society heir who wants more from her life than parties so she fills in an application form and hopes her father will give her permission to join the programme and he does, believing she won't make it very far. Paradise proves everyone wrong, though, including Craeg - fellow trainee and the guy she has an intense attraction towards. And the feeling is definitely mutual.

I enjoyed watching this play out, although Craeg's reluctance to start with annoyed me a little. But Paradise certainly wore him down in the end and it was fun watching.

It also focuses on Butch and Marissa's relationship. Both are dealing - or more precisely NOT dealing - with issues from their pasts and it's starting to drive a wedge between them. Then there's the battered female that comes into Safe Place - where Marissa works - on the brink of death that brings up old memories.

I did enjoy seeing a lot of the brothers again, it reminded me why I love this series and I can't wait to read more. I think The Shadows will be my next read.
at Wednesday, June 10, 2020