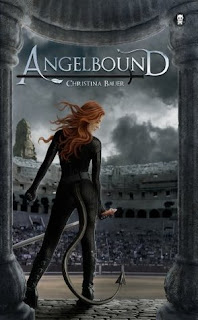 Eighteen year old Myla Lewis is a girl who loves two things: kicking ass and kicking ass. She’s not your every day quasi-demon, half-demon and half-human, girl. For the past five years, Myla has lived for the days she gets to fight in Purgatory’s arena. When souls want a trial by combat for their right to enter heaven or hell, they go up against her, and she hasn’t lost a battle yet..

But as she starts her senior year at Purgatory High, the arena fights aren’t enough to keep her spirits up anymore. When the demons start to act weird, even for demons, and the King of the Demons, Armageddon, shows up at Myla’s school, she knows that things are changing and it’s not looking good for the quasi-demons. Myla starts to question everything, and doesn’t like the answers she finds. What happened seventeen years ago that turned the quasi-demons into slave labor? Why was her mom always so sad? And why won’t anyone tell her who her father is? Things heat up when Myla meets Lincoln, the High Prince of the Thrax, a super sexy half-human and half-angel demon hunter. But what’s a quasi-demon girl to do when she falls for a demon hunter? It’s a good thing that Myla’s not afraid of breaking a few rules. With a love worth fighting for, Myla’s going to shake up Purgatory.

This is another book that has been on my Kindle for years. It's been a little over six years since I bought this from Amazon so it's about time I read this.

This starts with Myla, a quasi-demon, waking for school, only to find she has to fight in the arena again, something she lives for. There's some politics going on with the angels and demons and she finds herself being drawn into it. Add in Prince Lincoln of the thrax, a group of human demon killers, and she's not having the best time... Not with the tension that sparks between them.

I'll admit I'd been put off by the number of pages in this. I am not a fan of really long books and this is listed as being 500+ pages... But, I was quickly drawn into this. It had a really easy to read style and I quickly grew to like Myla. She's the kick arse, evil soul defeating, demon killing quasi-demon that want's to know who her dad is. And it is a mystery that I enjoyed seeing unravelled. There were quite a few twists and turns along the way.

The romance was kinda cute. They really don't like each other much to start with what with Lincoln being a demon hunter and Myla being part demon but the more time they spent together, it was pretty obvious that they had a spark between them and I enjoyed the build up to their relationship starting and flourishing.

I also really liked a few of the secondary character's such as Walker and Cissy. Zeke also wasn't so bad when he stopped being so "I'm hot, no-one can resist me" and started acting more normal.

It was a very well thought out and detailed story that I enjoyed getting my teeth into but I'm not going into too many details as it would totally ruin it for you. Let's just say Purgatory is in for a hell of a ride. If you like stories involving demons and angels then I'd give this a go.
at Thursday, June 04, 2020