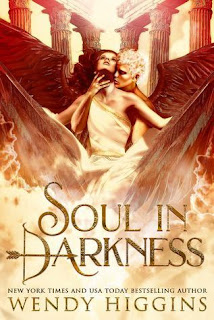 People travel from afar to the small isle in the Aegean Sea hoping for a single glimpse of Princess Psyche. Their adoration for the mortal woman is so all-consuming that citizens begin to shower her with the very gifts and offerings they once left at the alter of Venus, goddess of love and beauty.

But gods are known for their jealousy.

Cupid, the god of love, takes pleasure in causing strife and mischief in the lives of humans. He uses love as a weapon, humoring in the weakness of people at the whims of their feelings. When his mother Venus approaches him about punishing the human girl who dares to steal her offerings and affections from the people, Cupid gladly accepts.

Psyche's punishment is to be given to a mysterious creature who only comes to her in the dark of night under the pact that she will never lay eyes on him. She is terrified of this stranger, who the oracle described as a serpent. Her mate, however, is masterful in his dealings with his bride. He takes his time, morphing her fears into different sensations completely.

Based on the Roman/Greek mythology of Cupid and Psyche from Lucius Apuleius, New York Times bestseller Wendy Higgins brings the tale to life, weaving layers that show exactly how a sacrificial lamb can be enchanted by an unseen monster.

I've always been intrigued by mythology but I've always known more Greek mythology than Roman so the chance to read more of the Roman mythology and a tale of the God of Love, Cupid, himself? I had to read this.

Psyche is the human Princess whose looks have stunned her cities inhabitants into following her around and giving her gifts all her life. She can do no wrong in their eyes. But in giving the gifts to Psyche and not to the Gods, they've angered them and Psyche must be sacrificed by her family to marry a winged monster. But not all is as it seems.

I was really drawn into this story so easily. I was intrigued by the person Psyche was forced into marrying and it was amazing how quickly I came to like him. Of course I figured out who her husband was pretty quickly and the scenes between them were rather intimate at times and not always sexual.

Both Cupid and Psyche are looking for someone to love them for them and not for their looks. It was great to see the journey they both went on and I even cried at one point because I was so invested in them.

If you like mythology or any of Wendy Higgins' other book then you should give this a try.
at Monday, May 04, 2020