Fear for Me - Cynthia Eden 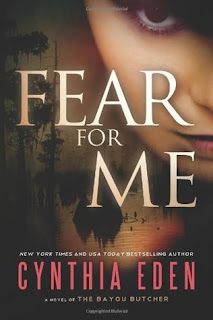 She’s the obsession two men share: one wants her love, the other wants her life.

A shared passion for justice first brought Baton Rouge district attorney Lauren Chandler and US marshal Anthony Ross together—when each played their part in bringing down the infamous Bayou Butcher. The sparks flying between the two made it clear they weren’t just a legal dream team. Then desire had to make way for duty, and what they had was done. But it would never be over.

Five years later, it’s none other than the Butcher who gets things started again, when his shocking jailbreak reunites the lawyer and the lawman…and reignites their love. But this time, the pair is in danger of being permanently parted—by a killer with revenge on his mind, and Lauren on the top of his list. As a new wave of terror sweeps through the streets and swamps of Baton Rouge, one man will pit his boundless passion against another’s relentless hate, for the life of the woman who obsesses them both.

I read the first book in this series a few years ago and it was ok - judging by my review on Goodreads of it - but I wasn't overly in to it. This one has been on my Kindle for a few years now so it's about time I read it.

This starts with the "Bayou Butcher" serial killer - Jon Walker - breaking out of prison and setting out to kill the people who put him there starting with Lauren Chandler, the DA that made sure he went down for life, as well as the judge and those on the jury. In comes Anthony Ross, a Marshall, who tracked Walker down the first time and Lauren's ex.

I was equally drawn into this when they were hunting Walker and freaked out when we had scenes from Walker's POV as he went about killing. The more I read, though, the more I was convinced that Walker wasn't doing everything alone and then it was the mystery of just who Walker was in league with that had me reading. I thought I had it figured out but I was so wrong.

The romance reignited between Lauren and Anthony as neither had really gotten over the other in the five years since they'd parted ways. It was nice to see inside both of their heads and what their feelings were towards the other. I'll be honest. I wasn't that interested in the romance so I skipped the sex scenes in this, totally uninterested.

I don't think I'll be reading the last book in the series. I'm not that into Romantic Suspense anymore.
at Monday, May 11, 2020