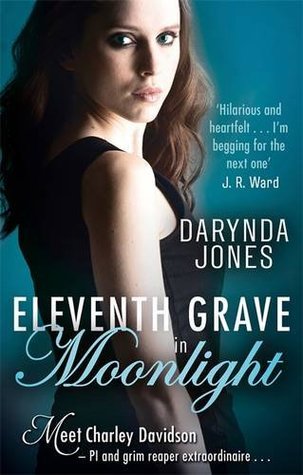 
A typical day in the life of Charley Davidson involves cheating husbands, missing people, errant wives, philandering business owners, and oh yeah...demons, hell hounds, evil gods, and dead people. Lots and lots of dead people.
As a part time Private Investigator and full-time Grim Reaper, Charley has to balance the good, the bad, the undead, and those who want her dead. In this eleventh installment, Charley is learning to make peace with the fact that she is a goddess with all kinds of power and that her own daughter has been born to save the world from total destruction.
But the forces of hell are determined to see Charley banished forever to the darkest corners of another dimension. With the son of Satan himself as her husband and world-rocking lover, maybe Charley can find a way to have her happily ever after after all.

I'll start by saying I LOVE THIS SERIES! Darynda Jones has written such an amazing likeable but slightly dumb, sometimes genius character in Charley Davidson. You can't help but like her.
This starts with Charley sitting in a psychiatrist's office as she equally does a job and confesses everything that she's learned about herself over the last ten books to the doctor in the chair. Turns out the shrink is dead and haunting the office. There is one big case that Charley is working on in this and it's the couple who kidnapped Reyes when he was a baby. There's a few other smaller things thrown in and we see Charley learn how to be who she was born to be with a little help from Reyes.
As I've already mentioned, I love this series. It is right up my street with it's snark, humour and romance. Characters that we've grown to love over the last ten books make reappearances, some new characters pop up and some that have been mentioned peripherally make themselves known. It's hard to give too many details without spoiling it for those who haven't got this far in the series.
If you've not at least started this series, then I can't recommend it enough, really. That is, if you like urban fantasy/paranormal romances. Or demons. Gods...
I have book 12 in paperback, too, and haven't decided whether to read it straight away yet - despite that bit of a cliff hanger that happened at the end! - as I feel I would immediately want to read book 13 to finish the series and I don't have it yet. It's on my to-buy list.
at Sunday, September 20, 2020