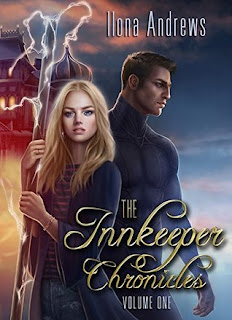 Meet Dina Demille, a nice Texas gal who runs a seemingly ordinary, quaint B&B.  But Dina’s inn is a magic, thinking entity; her fluffy Shih-tzu, Beast really is a beast; and her guests are the kind that no one on earth is supposed to know about:  guests like a dethroned galactic tyrant with a massive bounty on her head, the Lord Marshal of a powerful vampire clan, and a displaced—and superhot—alpha-strain werewolf.

So don’t expect a normal stay…and don’t stand too close, or you may be collateral damage….

In Clean Sweep, Dina—with the unwanted assistance of newcomer (and alpha werewolf) Sean Evans and Arland, a cosmic vampire soldier—takes on an extraterrestrial killing machine that could destroy her Inn, her neighbors, and everything she holds dear.

One Fell Sweep sends Dina to the galaxy’s worst penal colony to rescue her sister; and back home to fend off a clan of assassins in pursuit, all while saving a guest’s civilization from annihilation…and searching for her missing parents.

This is a pretty short start to the series, introducing us to Dina. She's a fairly new Innkeeper - a person with magic, who offers sanctuary to those from other planets as they pass through Earth - though her parents used to run one when she was little.
Something is killing dogs in her neighbourhood and she approaches the local werewolf, Sean Evans, to ask him if he will deal with it and he acts clueless so she decides to take matters into her own hands. Lets just say Dina gets more than she bargained for.

I enjoyed this. It was an interesting start with good introductions to the Innkeeper life and most of the characters included in this.

I was willing Dina and Sean on as they tried to take down the person behind the dogs deaths, and also for that spark of romance between them.

This one was longer. Dina is asked to host a peace summit between three warring factions who live on Nexus, a planet of sorts. They have been at each others throats for years and the Arbitrator, George, is finally hoping that they can work things out.

We see a lot of the same characters from the previous one but I was missing a certain someone quite a lot - Sean. Dina contacted him near the start but Sean was away from Baha-Char and we didn't see him for a lot of the book.

The peace summit turned out really well in the end but everyone had to go through quite a lot to get there. We had deceit, poisonings, deaths... It certainly wasn't easy to achieve and I won't spoil it for future readers by going into details.

I'm glad Sean's back on Earth and that we will possibly see their romance bloom properly in the next one.

Off to start book 3.

This one starts with a bang, almost literally, as a boom bike rides through their small town to deliver a message to Dina. A message from her sister, who she hasn't seen for years, asking for help. Not to mention the arrival of a Hiru, a peaceful race that has been hunted for generations because of their ugly exterior, to the inn seeking sanctuary.

There was a lot of action in this one, it seemed to never stop, and I was getting very eager for everything to come to a head. So many things were going on, I didn't want to stop reading.
Things progressed between Dina and Sean. Old friends showed up to help when things went awry. We had some really cute scenes with little Helen, Dina's niece.

I liked a lot of this book. It is my favourite of the series so far and I cannot wait to continue it to see more of this band of friends and guests.

P.S. I also feel like I should mention the artwork included in this book. The drawings of Dina and Shaun and Maud and Helen... All amazing.
at Tuesday, April 21, 2020