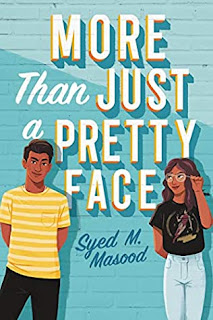 Danyal Jilani doesn't lack confidence. He may not be the smartest guy in the room, but he's funny, gorgeous, and going to make a great chef one day. His father doesn't approve of his career choice, but that hardly matters. What does matter is the opinion of Danyal's longtime crush, the perfect-in-all-ways Kaval, and her family, who consider him a less than ideal arranged marriage prospect.

When Danyal gets selected for Renaissance Man, a school-wide academic championship, it's the perfect opportunity to show everyone he's smarter than they think. He recruits the brilliant, totally-uninterested-in-him Bisma to help with the competition, but the more time Danyal spends with her...the more he learns from her...the more he cooks for her...the more he realizes that happiness may be staring him right in his pretty face.

I got a copy of this book via Netgalley in exchange for an honest review.

This is the first book I've read where the main characters are Muslims. It's a good insight into the religion and the various ways people follow it.

So this starts with Danyal. He's not the best in school, but, as quite a few people point out, he's got a pretty face. It's not that he's stupid or anything. He just has other interests in life such as cooking, which he is very good at and wants to become a chef. His father doesn't agree with his career choice and they have several tense conversations. His mother, on the other hand, cannot wait to marry him off to someone who would be good for the family.

I've just struggled to write the above description without giving too much away about this story.

I did enjoy this. Danyal, as I mentioned above, may not be the brightest guy but I really grew to like him. He was quick witted and passionate about what he cared about. His Renaissance Man speech showed that perfectly. History was far from his favourite subject but the Bengal famine became something he wanted to let people know about and he did it in a way that didn't judge so much as inform. Very well thought out.

I also quite liked the romance. It was a very slow burn. They spent quite a lot of time together but mostly as friends. The more time they spent together, laughing, studying and cooking, the more the feelings grew and I was willing them to get together properly, family be damned. It took a long time, though, with other factors getting in the way.

This book was a great insight for those of us who aren't Muslim into what the religion is like and the broad range of ways you can follow it. Sohrab was very invested in the religion, Intezar wasn't following it that much, if at all, and Danyal was like a happy medium.

This was enjoyable but, for me, it was a little too focused on the history and Churchill for the Renaissance Man challenge. I know it was a big part of the plot but History for me, like Danyal, bores me. I wanted more of the romance.
at Wednesday, April 01, 2020