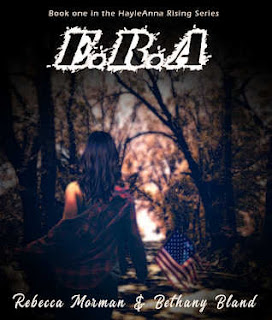 HayleAnna is just a small town Oklahoma girl and is the only daughter of Seraphina and Taven Mayall. She has been training her whole life to join E.R.A since it is the closest thing to a military that America has left. After a complete government fall in the year 2040, there are no laws, no rules and they only people trying to stop all of the rogue groups from taking over and making America a dictatorship, is the E.R.A. HayleAnna tries to juggle getting recruited, dealing with losing the only person she has left in her life, and not getting kicked from the program for falling head over heels in love with her hand to hand combat instructor, Jasper Moore. She knows that the consequences are great but she thinks that the rewards just might be worth the risk.

This sounded rather good so I downloaded it but the more I read, the more I disliked it. That sounds bad but when I generally enjoy almost 95% of books I read, I think it's fair. It might be because it was self published and needed a really, really good proof read and edit as the amount of misspellings and simple errors drove me mad.

So this starts with HayleAnna waking up for her first day of training to join E.R.A - America's army of the future - so she can follow in her dads footsteps. She meets the trainers, a group of five, and makes friends with her roomie, AZ, before embarking on her schedule of training throughout the days and weeks so she can help stop the crazy madman who is trying to rule America after the government collapsed a handful of decades ago.

I had a couple of other issues with this book, just simple things I didn't understand.
One: Her name is HayleAnna but everyone calls her Anna. Surely Hayle with it coming first would be her shortened form?
Two: The romance. I didn't buy it. One minute they're sharing looks and winks and then the next they're pretty much dating and getting married?
Three: The continual use of the word "setting" instead of "sitting". "Setting up in the bed..." Maybe it's because I'm British but that made no sense to me. I set an object down but I sit down.
And four: I felt like I missed something in that 61%. She leaves the training completely to go see her mum amid a possible threat, but when her birthday rolls around everyone from the training is there wishing her well, including the instructors who told her she would be kicked from the program if she left? And then she actually gets a place with E.R.A?

That was about the point where I gave up with the story. It wasn't making sense to me anymore. None of it was. I didn't buy the romance between the characters, either, and I wasn't a fan of the explained conversations without having it written in full.

It did have a promising storyline and I'm sure if the authors gave it a full proper once over that it has the potential to be a good book but currently I really wasn't feeling it at all.
at Friday, April 10, 2020