Wrapped Up In You - Jill Shalvis 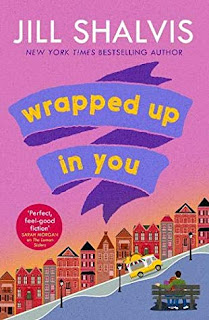 After a lifetime on the move, Ivy Snow is an expert in all things temporary—schools, friends, and way too many Mr. Wrongs. Now that she owns a successful taco truck in San Francisco and an apartment to call home, Ivy’s reinvented life is on solid ground. And she’s guarded against anything that can rock it. Like the realities of a past she’s worked hard to cover up. And especially Kel O’Donnell. Too hot not to set off alarms, he screams temporary. If only his whispers weren’t so delightfully naughty and irresistible.

Kel, an Idaho sheriff and ranch owner, is on vacay, but Ivy’s a spicy reason to give his short-terms plans a second thought. Best of all, she’s a tonic for his untrusting heart, burned once and still in repair. But when Ivy’s past intrudes on a perfect romance, Kel fears that everything she’s told him has been a perfect lie. Now, if only Ivy’s willing to share, Kel will fight for a true love story.

I read book 7, Playing for Keeps, several months ago and enjoyed it.

This one follows Ivy, who we saw quite a lot of in the previous book since she was one of Sadie's best friends, who owns the areas best taco truck with its spicy food. It's as she's getting ready for the breakfast crowd that she bumps into Kel, a sheriff visiting family in the area for a few weeks and an instant attraction blooms between them. They both try to fight it but keep being drawn back to each other.

I think I liked this more than Playing for Keeps. Kel's protective nature and Ivy's don't-get-close-to-me-because-I-wont-stick-around attitude sort of made me want them to get under each others skin and they did, in a big way. Admittedly it took a while before anything happened but we had hot glances and interesting conversations. Both of them are damaged in some ways. Ivy never really had a parent so she's wary of letting people get close as she's scared of what might happen and Kel keeps himself detached from relationships and blames it on his job for not staying around.

What I did enjoy was seeing them working through their problems so they could be with each other. It wasn't easy to get over them and it wasn't until near the end of the book that they finally got together and it was sweet.

I really like this group of friends. They're the ones who'll stick with you through thick and thin and won't shy away from any problem you might have. I wish I'd read all the previous books - books 1-6 - so I could see how some of these couples got together but I will be keeping my eye out for more books in this series.
at Monday, March 09, 2020