Love You, Love You Not - Jo Watson 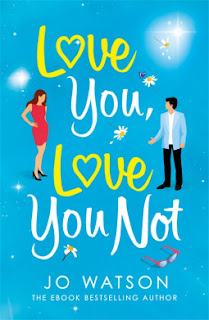 There's a fine line between love and hate...

Poppy Peterson is about to be evicted if she doesn't pay her rent. She used to be an actress on a telenovela until her character, Ramona Gonzalez, Executive Administrative Assistant to the CEO, was killed off. Unfortunately, dead characters can't pay the bills.

Ryan Stark is a tough boss - especially if you're his assistant. He's been through five in the last two months and now no one wants to work for him. He needs an assistant who can meet his demands. And he can be very demanding.

Poppy's been an assistant before - well, on screen anyway. It can't be that hard to do in real life, right?

Two things are for sure. Poppy is about to play the role of a lifetime. And Ryan is about to learn a whole new lesson about what's really important in life.

This is another chick-lit author that I really enjoy. In the past a lot of the genres books I've read focused on the main character overcoming a separation or a death and them just finding friends and people to help them through it, and being happy and getting on with life. Whereas Jo Watson writes fun, quirky romances with a good cast of friends and family.

This starts with down-on-her-luck Poppy applying for a job she has no experience for, an executive assistant to boss, Ryan Stark. She's an out-of-work actress, so uses one of her characters to apply for the job and after several bad interview questions she walks out only to find her car being towed away and it's raining. Ryan leaves work, angry at his lack of finding a new assistant and sees Poppy sat in the rain and reluctantly gives her a lift home...and the job. What follows is a crazy working relationship and the blooming of an actual romance, though a rather reluctant one - at first.

There are some truly crazy scenarios in this but they made me laugh at times. Poppy getting herself attached to a pole at a building site and losing her shirt as she pulls away, leaving her in just a bra and a skirt. Rescuing the hurt pigeon and its amazing Houdini acts.

There were some more serious moments, too, and I thought it was really cute in places.

A scene near the end had me wanting to rip Ryan's head off. He totally overreacted and all I can say is thank God for Emmy, his niece - she's 13 - who had more sense than he did, and thankfully talked it into him.

Also, I feel I have to mention the soap opera that Poppy was on. What the heck is that thing all about? The whole thing is just ridiculous but in a sort of so-crazy-I-have-to-watch-more kinda way. The whole plot is...well, ridiculous. But I found myself laughing at it.

If you like romantic comedies or chick lit that focuses on the romance then you will love this.
at Sunday, March 29, 2020