The Girl He Used to Know - Tracey Garvis Graves 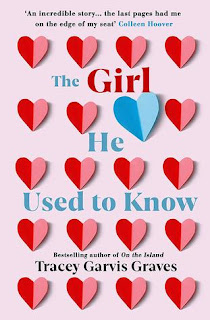 What if you had a second chance at first love?

She feels lost in social situations, saying the wrong thing or acting the wrong way. She just can't read people. She prefers the quiet solitude of books or playing chess to being around others. Apart from Jonathan. She liked being around him, but she hasn't seen him for ten years. Until now that is. And she's not sure he'll want to see her again after what happened all those years ago.

Except that, actually, she doesn't like being alone at all. And she just might have a second chance at first love.

I'll admit I bought this as a spur of the moment thing from one of my favourite bargain book shops The Works. I've never read anything by this author though I do have her book, "On the Island", to read on my Kindle - and have done for several years now.

This book switches between 1991 and 2001 with almost every chapter after Annika meets her college love for the first time in years, bringing back memories of their time together and making her want to reconnect with him. They meet for coffee and decide to reconnect as friends, going out to dinner later on in the week. Things slowly progress between them and they try again.

The last few chapters of the book take place around September 2001. I honestly had no idea where the author was going with this until the news channel Annika was watching started talking about "a plane crashing into the North Tower" and I'll admit a little shiver went through me.

I'm assuming Annika has some sort of Autism because she has a lot of the same traits as Rikki - from Water Bound - that I read a little while ago. Doesn't like certain clothing because of how it feels, hates loud sounds, doesn't know how to interact with people very well...etc. In fact this was discussed further on in the book and she is on the Autism spectrum.

I guess people are a bit cruel to those they don't get or understand but I really like how Jonathan always seemed to know what to say and do to ease Annika's anxieties when they were out together. He didn't mind putting his own wants aside to help Annika cope better in situations. They were perfect for each other in that.

I just found the story a little slow and not much seemed to happen in it really. The jumping between months seemed to miss out a lot of their growing relationship and I always feel a little cheated when that happens. I like to read it all.
at Wednesday, February 05, 2020