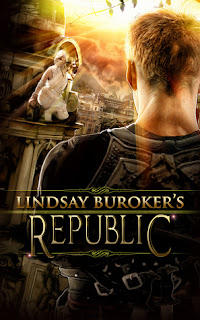 After the notorious outlaws Amaranthe and Sicarius helped overthrow the corrupt faction controlling the empire and brought in a great war hero to lead the nation to prosperity, they finally earned their pardons--and some time off. A tropical vacation cruising around in a private submarine? Perfect. But their trip is interrupted by a summons from the new president: they're needed back at home. Trouble unlike anything they've ever dealt with threatens to destroy the capital city and throw the fledgling republic into chaos.

I've had this book on my Kindle for a long time now. It was a gift from the author after signing up to her newsletter when she'd first released it, for fans of the Emperor's Edge series. And I was a big fan, steaming through all seven (really long) books, following the adventures of Amaranthe and Sicarius - and begging them to get together!

This one starts a few months after the events of Forged in Blood I & II, following just Amaranthe and Sicarius as they travel to a tropical island in a submarine, only things aren't as drama free as they were hoping and they get chased by the islanders after being recognised from a wanted poster of Sicarius. They quickly come up with one of their famous spur-of-the-moment plans and manage to evade them all and escape back to their submarine. Once back on board they get a summons from the newly appointed leader so they head home.

Back home, a giant carnivorous plant has started to grow in the cities harbour and is causing mayhem, growing rapidly and seeming to have a mind of its own. It doesn't like being cut, releasing a black mist with horrible consequences. Also back home, we meet up with old friends like Sespian and Maldynado and it feels like old times with the gang back together.

It was quite easy falling back into this series, though admittedly I couldn't remember half the cast apart from Amaranthe and her gang.

One thing I had forgotten about this was the use of unusual words to replace more boring ones such as 'verisimilitude' instead of...inspection, I guess is its easiest translation? It's a good job my Kindle has a built in dictionary or I'd have been stumped reading half of this book.
at Friday, February 21, 2020