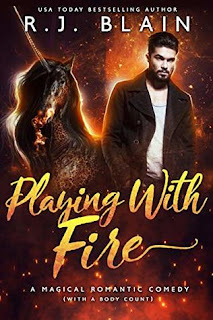 What do you get when you mix gorgons, an incubus, and the Calamity Queen? Trouble, and lots of it.

Working as the only human barista at a coffee shop catering to the magical is a tough gig on a good day. Bailey Gardener has few options. She can either keep spiking drinks with pixie dust to keep the locals happy, or spend the rest of her life cleaning up the world’s nastiest magical substances.

Unfortunately for her, Faery Fortunes is located in the heart of Manhattan Island, not far from where Police Chief Samuel Quinn works. If she’d been smart, she never would have agreed to help the man find his wife.

Bailey found her, all right—in the absolutely worst way possible.

One divorce and several years later, Bailey is once again entangled in Chief Quinn’s personal affairs, and he has good reason to hate her. Without her, he wouldn’t be Manhattan’s Most Wanted Bachelor, something he loathes. Without her, he’d still be married.

If only she’d said no when he asked her help, she might have had a chance with him. While her magic worked well, it came with a price: misfortune. Hers.

When Quinn’s former brother-in-law comes to her for help, he leaves her with a cell phone and seventy-five thousand reasons to put her magic to the test. However, when she discovers Quinn’s ex-wife is angling for revenge, Bailey’s tossed in the deep end along with her sexiest enemy.

This one starts with Bailey working at the coffee shop where she makes drinks for its regular but unusual breed of customers from humans to pixies to werewolves, adding a pinch of dust to each drink to give them a high. Her nemesis, Chief Quinn, comes in and she makes him a drink before he heads out, taking her boss with him, leaving Bailey to work an 18 hour shift alone. Jealously flares within Bailey as she's had a thing for Quinn since he asked her to find proof of his wife's cheating. When Bailey is asked by Quinn's former brother-in-law to help her find someone, she's reluctant but agrees, and is handed a phone. Only the phone isn't all that it seems setting in motion a series of events that throws her into Quinn's life more than either bargained for.

I enjoyed the first 40% of this more than the latter 60%. The beginning was fun and quirky. I loved the sort of love/hate thing she had going on with Quinn. I enjoyed the banter between her and some of the other cops and it was just up my street. It just seemed their will they/won't they get together thing was concluded too early in the book and I was wondering what the rest of the book would be about. It lost some of its appeal for me after the weird Gorgon vomit scene. And then I just struggled to connect with it again. I soldiered on, determined to finish it.

I also found Quinn's family very complicated. He has almost every type of creature in his family tree from angels to incubus to gorgon but he is very much human and I couldn't keep track of who was who half of the time.