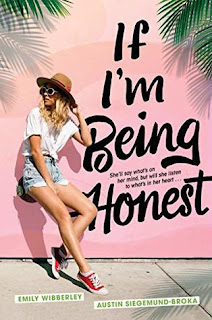 Cameron Bright's reputation can be summed up in one word: b*tch. It's no surprise she's queen bee at her private L.A. high school--she's beautiful, talented, and notorious for her brutal honesty. But when she slips up in front of her crush, Andrew, any affection he may have had for her quickly fades. To win him over, Cameron resolves to "tame" herself, much like Shakespeare's infamous shrew, Katherine. If she makes amends with everyone she's ever wronged, Andrew will have to take notice. Thus, Cameron begins her apology tour with Brendan, the guy whose social life she single-handedly destroyed. At first, Brendan isn't so quick to forgive, but slowly he warms to her when they connect over a computer game he's developing. To Cameron's amazement, she actually enjoys hanging out with Brendan; he appreciates her honesty in a way Andrew never did, and she's left wondering: maybe you shouldn't have to compromise who you are for the kind of love you deserve.

This starts with Cameron eating lunch with her two best friends and trying to do her Econ coursework. They start chatting about a party where Cameron's crush, Andrew, will be at the weekend and she plans to tell him she likes him. But things don't go great when they get interrupted and Cameron is really horrible to them, causing Andrew to call her a b*tch. She decides to try and publicly apologise to the girl who interrupted them and do it in front of Andrew but the girl points out something obvious and things get worse with Andrew.  She then decides to make a list of people she needs to apologise to and tries to figure out how.

I actually got really into this staying up until midnight last night to get to the 80% mark. I was drawn in by Cameron and the journey she went on from just being brutally honest and a bit of a b*tch to someone who enjoyed being friends and spending time with the less popular crowd. It was a great read and Cameron's internal thinking was interesting.

Cameron and Brendan were super cute. They had quite a lot in common and I found myself rooting for them from early on. I'll admit I had a little cry at a few bits. Some of the tears were for Cameron in regards to her dad, and some were for her and Brendan when he took something the wrong way and I felt as wounded as Cameron did.

I've read this is based on The Taming of the Shrew but I'm not that big a fan of Shakespeare so I can't compare as I've never read the book/seen the play but Cameron's views on it helped me understand it a lot more.

I'd enjoy reading more books from this writing duo.
at Wednesday, February 26, 2020