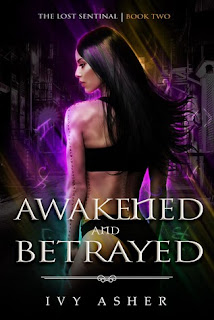 My name is Vinna and I am a Sentinel.
I’m the last in a line of a hunted, magical race, coveted and killed for our power and abilities.
I was hidden and protected, but now that I’ve been found, it’s a race to see who can command and control me.
Joke’s on them, I bow to no one.
I need to master my magic, and protect the five guys I’ve marked as my own at all costs.
Because the line between friend and foe is dangerously blurry, and I’m collecting enemies like Sentinels collect runes.
It’s time to prepare for battle, claim my place, and get ready to fuck up anything or anyone that comes for me and my Chosen.

Awakened and Betrayed carries on from the previous book, The Lost and the Chosen, with Vinna on her way to a meeting with the Elders. It does not go well and she is separated from her guys and Lachlan's coven and ends up with Enoch and his. Things get a little complicated as Vinna's magic is assessed by the Elders and they realise how strong she is, if not what she is.

I feel like I should point out a LOT happens in this book. The above happens within the first couple of chapters but it sets in motion a series of events that occur throughout the book. She also meets a pack of werewolves, has a meeting with a certain lamia/vampire, makes friends with some people again, gets some new magic etc. It is filled to the brim with stuff.

I liked this but it didn't quite have the same feel to it as the first. It wasn't as smoothly written and if I'm honest, I'm finding it hard to keep up with who everyone is. As I mentioned in a status update on Goodreads: "She could end up with the biggest harem going because it doesn't matter who she meets, they're always drawn to her."

I don't know if I'll be continuing the series. My Kindle Unlimited runs out in less than two weeks and I have a few other books I want to get through before then. I may eventually come back to it.
at Saturday, February 01, 2020