The Lost and The Chosen - Ivy Asher 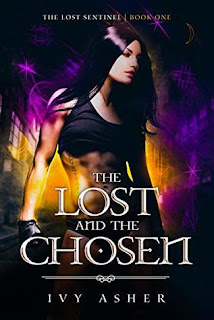 My name is Vinna, and I’ve been keeping a lot of secrets.

You would too if you'd experienced some of the weird shit I have: red-eyed monsters chasing me, markings on my body appearing out of nowhere, a strange power that crackles colorfully over my skin from time to time, and don't get me started on the weapons I can conjure up almost out of nowhere.

Lucky for me, I have yet to meet someone whose ass I couldn't kick, inside the ring or out. I put that to the test when I run headfirst into a fight that brings all my secrets, and reality as I know it, crashing down around me.

Now, I'm looking for answers and trying to piece together what the hell is going on. Paranormal is my new way of life. It's not going to be easy, and I'm not exactly welcome.

That is, until I meet the boys, and trust me, they are anything but boyish.
I'm up against elders who think I’m too powerful, a family who views me as a threat, and something lurking in the shadows that's been coming for me my whole life.

There’s not a chance in hell I’m going down without a fight. I’m not lost anymore, and I'm about to show this world exactly what I can do.

I don't think this book ever really slowed down it's pace. It starts with Vinna getting ready for her next mma? fight. After winning the fight she heads outside and sees a strange ripple in the air that she can't help but investigate and comes across a battle between two groups of men. She gets drawn into the fight and the winning side tell her she's like them - a caster - and that she should go with them back to their accommodation so they can fill her in on what she is. It takes a little convincing but she eventually goes and begins to learn about what she is. In the process she meets five fellow casters and feels a connection to each of them.

A lot more happens than my abbreviated version above and it's really good. We have some really good interaction between Vinna and each of the five guys. You get really drawn into their story. Then there's the older paladin group and their bond and how they are with Vinna. It's a little complicated at times between them and I got a little upset myself near the end.

I thought this was really well written and thought out. It was a different take on magicians/magic users and I really enjoyed it.

It does have a bit of a cliffhanger ending and I am interested to see what will happen next, both with Vinna and her harem and the vampires who are after her.
at Friday, January 24, 2020