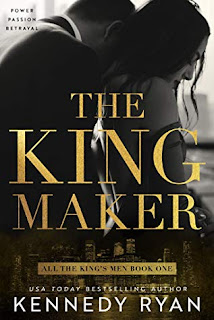 "I'd do anything to keep her."

Raised to rule, bred to lead and weaned on a diet of ruthless ambition.

In a world of haves and have nots, my family has it all, and I want nothing to do with it.

My path takes me far from home and paints me as the black sheep. At odds with my father, I'm determined to build my own empire. I have rules, but Lennix Hunter is the exception to every one of them. From the moment we meet, something sparks between us. But my family stole from hers and my father is the man she hates most. I lied to have her, and will do anything to keep her. Though she tries to hate me, too, the inexorable pull between us will not be denied.

And neither will I.

This one starts on the last day of Lennix's four day coming of age ceremony when she's thirteen. Her mum kisses her goodbye as she goes off to protest in one of America's big cities against something the government has planned, only she never comes home again. Fast forward four years and Lennix is loudly protesting the demolition of the sacred Native American ground where she had her ceremony and where elders are buried, so they can build an oil pipe that will also pollute the local water.
Maxim Cade is the son of the millionaire/billionaire laying the pipeline but is against the use of fossil fuels and his fathers companies use of violence against those protesting the pipelines build. He puts himself between a dog's jaw and Lennix and as they are carted off to jail they bond with each other and a connection is formed that lasts years, though they don't see each other again for another four.

This book spans a lot of years. 14 from that meeting when Lennix is 17. They are now both successful in their own right. Maxim with his green energy business and Lennix with her, erm...I don't know the title for what she does. She helps political figures get into office, fighting for those who are helping the minorities.

I get that both are going after important issues that are happening in America, and the world, but I did feel like at times it was a bit repetitive and very in-depth with the information we're told - which I'll admit, I found a bit boring. Also, politics is not for me and it began to take up a fair part of this book towards the end.

Some of the secondary characters were cool. The guy - can't remember his name, some sort of surname - who was with Maxim on the Antarctic boat? I liked him. He talked sense a lot and ended up really close with Maxim. I also liked Wallace. That bit at the party around the 70% mark when he's being - in Lennix's words - her beard, trying to keep Maxim at arms length after not seeing each other for ten years, was fun.