Show Me the Way - A.L. Jackson 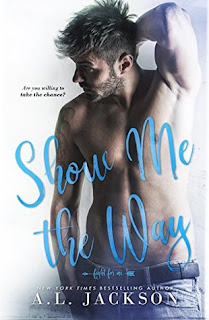 Rex Gunner. As bitter as he is beautiful.

The owner of the largest construction company in Gingham Lakes has been burned one too many times. His wife leaving him to raise their daughter was the last blow this single dad could take. The only woman he’ll let into his heart is his little girl.

Rynna Dayne. As vulnerable as she is tempting.

She ran from Gingham Lakes when she was seventeen. She swore to herself she would never return. Then her grandmother passed away and left her the deed to the diner that she once loved.

When Rex meets his new neighbor, he knows he’s in trouble.

She’s gorgeous and sweet and everything he can’t trust.

Until she becomes the one thing he can’t resist.

One kiss sends them tumbling toward ecstasy.

But in a town this size, pasts are bound to collide. Caught in a web of lies, betrayal, and disloyalty, Rex must make a choice.

Will he hide behind his walls or will he take the chance . . .

This one starts with Rynna leaving her small town after yet another run in with her bullies, breaking her Grammy's heart as she flees. Fast forward quite a few years and Rynna is coming back to run the diner her Grammy used to own after her passing away. She's wary of people recognising her and dreads running into her bullies but makes new friends within her first days and meets her neighbours, single dad, Rex, and his young daughter Frankie Leigh. Rex has closed himself off from pretty much everyone and, intrigued by the contradictory man, Rynna can't help wanting to get to know him.

This was sweet. Both damaged in one way or another, wanting to overcome it when they meet that special someone and in this case it's each other. My only issue is I want angst in my stories lately. I want them to scream and fight and make up with each other. That didn't quite happen but somewhere around the 65% mark, someone made an appearance that sent everything up in the air and I was dragged into the story fully for the first time. It got a little intriguing with me wondering how it would all play out.

One thing I did really like about this book was Frankie Leigh. I have a huge weakness for adorable babies/children in my romances and Frankie Leigh may just have won the award for cuteness. She's so full of cute energy with her enthusiasm and crazy fashion sense. Adorable!

I wouldn't mind going back to Gingham Lakes to read Rex's friends stories.
at Wednesday, January 01, 2020