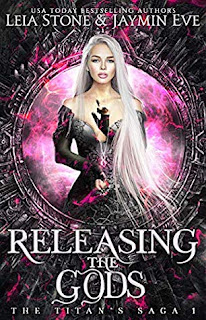 She’s well on her way to all of that, until one drunken dare ends up with a cut hand, blood sacrifices, and a thousand-year-old prison opening to reveal a giant of a man.

Finding herself with a Titan of a problem, she does the only thing that makes sense in that situation: selfie. Because he’s beyond hot, and that has got to be worth twenty thousand followers.

Only it turns out, this is no joke.

Cronus is really a Titan, and he’s set out to destroy the leader of the Greek pantheon.

When Maisy makes a colossal mistake, unleashing an untold evil on the world, Cronus is the only one that can help her.
#oops

An end she quite possibly caused—not that she’s admitting to anything just yet.

So this has a pretty quick start. Maisy is celebrating her twenty first birthday with her work colleagues on the beach and is double dared to go up the cliff to the haunted cave at its top, cutting her hand on a sharp rock on the way up. Tripping as she enters the cave, her bloody hand presses against the rock wall and the wall opens to reveal an almost seven foot mountain of a man - Cronus, a Titan - who's been imprisoned for the last 1000 years. After freeing the Titan she now finds herself with a complicated life bond connecting them together meaning they can't be more than five feet apart without agonizing pain which leads to some fun scenes.

I like how the authors integrated social media into this. It is a very big thing in the world today so to see a character who uses it regularly and wants to use it to become famous was rather realistic but I have to admit the self proclaimed hashtag queen used far too many hashtags mentally for me.

Also I think Maisy's name changes how it's spelt somewhere in this book. According to the description above it's spelt Maisy but I couldn't truly tell you if it begins like that and changes to Maisey but since about the 50%-ish mark that's how I've noticed it's been written.

I enjoyed this despite the #hashtags and will be continuing the series when more have been released.
at Tuesday, January 21, 2020