I Hate You - Ilsa Madden-Mills 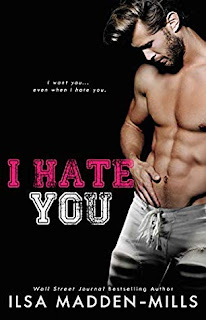 She’s been expecting this ever since their latest showdown. She had good reason.

Hottest guy she’s ever seen.
Former fling.
Dumped her in front of all her friends.
At her own party.

So no, she’s not about to forgive and forget just because he sits next to her in class. He thinks all he has to do is turn on those baby blues, and she’ll melt right back into his arms. Please. She’d be crazy to let this cocky player affect her again. (Tell that to her body.)

Charisma Rossi.
Brainy girl with a dash of bad.
The one who got under his skin.
The one he cut loose.

Blaze knows she’s the riskiest prospect at Waylon University, but none of the interchangeable girls he hooks up with have ever made him feel the way she did. There’s absolutely no way he can have the girl and the game.

So why can’t he stop trying to win her back?

Can this wide receiver score the girl or will he make the biggest fumble of his life?

This starts with Charisma - Charm, to her friends - coming back to college after break and dreading seeing the guy who dumped her rather publicly. He just happens to be a football player and one of the most popular guys at school so everyone knows what happens, which Charm finds hard to deal with. The only issue is neither of them are happy about what went down. Charm thought things were going well, despite the rules she set down, while Blaze ended it believing that he'd end it before Charm did. As they spend several classes together it's hard for them to continue to fight the attraction between them and neither really wants to try anymore.

This actually pulled at my heart strings more than I thought it would. At the beginning I was very much Team Charm. The dumping had come out of nowhere and I felt sorry for her with it being done so publicly and out of the blue. But the more I read, the more I got in Blaze's head, the more I began to understand his thinking. He had issues due to his childhood.

I'll admit that I wanted to bang the characters heads together a few times to try and knock some sense into them. They annoyed me in how stubborn they were being. Both wanted it to be something more but they still refused to let the other one in. GAH!

Nevertheless, I did really enjoy this and would love to read more of Blaze's football player friends, mainly Dillon with his charm and love of the ladies just to see who would win his heart.
at Monday, January 06, 2020