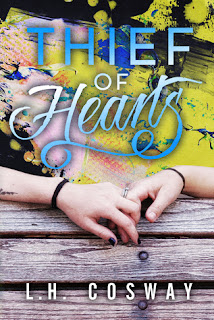 Seduce the teacher.
Meet the cousin.
Make a deal.
Steal the painting.

Andrea Anderson has no clue of the thoughts churning around in the dark and dangerous ex-con’s head as he enters her classroom. In fact, she’s momentarily lost for words. Not in her entire teaching career has she had a student who looked quite like Stu Cross.

A widow at just twenty-eight, love is something Andie hasn’t considered a part of her life for a very long time. However, when lingering touches turn to whispered words and hot, searching stares, she begins to wonder if maybe she should take a leap of faith.

But Stu is in her class for a reason, and it has nothing to do with love. He’s there to burrow his way into her life and repay a debt, otherwise his family will suffer. Andie is the first person to show him true kindness since he left prison, and though he doesn’t want to mislead her, he doesn’t have another choice.

Before long, Stu can’t tell whether or not he’s acting anymore, and his feelings for Andie could throw all of his carefully crafted plans into complete and utter disarray.

I read the previous books in this series a while ago now and gave all of them 4.5 stars but one, which is a rare thing for me to do.

This is Stu's story, Lee's brother from the previous book. He's just been released from prison and has enrolled in an adult class where Andrea is teaching at the local college. There's an instant attraction between them but Andrea fights it as Stu is her student. Stu flirts with her continuously and before long feelings begin to emerge. It turns out all is not as it seems.

I won't go into too much detail as it will ruin the story but I did enjoy this. I grew to really like Stu but he did deceive Andrea a bit. He made up for it big time and, through Andreas teaching and her just being a really supportive, caring person, he started to believe in himself and that he could do better than being a thief.

That epilogue had me smiling like a lunatic. Alfie is a bit of a genius!

This hasn't been my favourite of the series but I have enjoyed seeing more of the Cross clan, and I'm looking forward to reading Trevor's story next. I have One Epic Night as a freebie from the author which is a prequel to the sixth book in this series and I will be reading it next.
at Monday, December 09, 2019