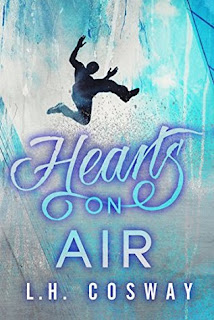 Trevor Cross came into Reya Cabrera’s world with a bang and faded out with a whimper. They vowed to make it work, but life had other plans. After chasing his TV dreams for years, Trev finally became the UK’s next big reality star, but he alienated his family and friends in the process. Now he finally has everything he ever wanted. Women. Money. Fame. But none of it means anything when he doesn’t have the one thing that matters most: love.

Money leaves a gaping hole. Fame surrounds him with loneliness. And no woman makes him feel like Reya used to before the whirlwind of success pulled them apart.

He has a plan to get her back for good. However, with a hectic filming schedule looming, the only way to do that is to convince her to come on the road with him. Reya has been stuck in a rut for a while, and the opportunity to travel across Europe and play her music for new audiences seems like heaven. The only catch? She has to do it with the one boy who ever got close enough to break her heart. But he’s not a boy anymore, and as she gets to know him again she can’t deny her respect for the man he’s become.

Every time she’s around him her heart feels full of air, like a balloon about to pop. Little does she know, Trev’s feelings are just tumultuous as hers. One thing’s for sure, these three weeks on the road together will either make them whole again or break them irrevocably.

Well, first things first. You DO NOT have to read book #5.5, One Epic Night, to understand this as it is included at the beginning of this book.

Then the story continues where that one left off. Trevor is now a TV star in a free-running show that follows him and a handful of other free runners as they do stunts around London and other big cities. One difference now is that Reya is not in his life. Chapters go back and forth a few times so we see what happened in the months following their "one epic night" and how things didn't end so well with them.

It's been about 2 years since then and Trevor suddenly turns up in Reya's life again wanting to be friends again and asking if she'll fill in for one of their pregnant PA's while she's off on maternity. Reya is wary of letting Trev back into her life but eventually agrees and they travel to several cities around Europe with the group doing stunts and free running in pretty parks and some well known places. As they spend time together, they grow closer once more and before long those feelings from two years ago are creeping back in.

I also liked how we saw pretty much every other character from the series in this one towards the end. I had honestly forgot how they all connected but seeing them in those last few chapters was really nice.

Definitely should be read if you've enjoyed previous books in the series.
at Sunday, December 15, 2019