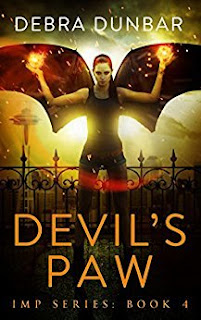 For once no one wants to kill Samantha Martin. She’s free to do all the things a mischievous imp loves to do- like remove all the county speed limit signs, and wrap City Hall in crime scene tape. Her only worry beyond organizing the delivery of her boyfriend’s birthday present, is writing those pesky four nine five reports for the Ruling Council of Angels. But imps can never stay out of trouble for long.

Demon corpses have been found drained of all energy, their spirit selves ripped clean from their bodies. Sam’s angel, Gregory, considers her a prime suspect, so when an angel is discovered dead in the same manner, he drags her to Seattle and Juneau to try to clear her name. The race is on to find the murderer before Sam’s secret is exposed and she’s blamed for the deaths. But is a devouring spirit really the killer, or is there more to the deaths than either Sam or Gregory suspect?

Once again, this is a book that has been on my wish list on Amazon for several years. 2017, I think, when I read an anthology containing books 1-3 and really enjoyed them.

This one starts with Sam preparing for Wyatt's birthday. She's got him a special gift - his sister that was stolen at birth and switched with a changeling. Wyatt is over the moon at having his real sister back and is determined to help her get used to life in the human world.

On another note, Sam is now the Iblis and has to write reports for every human she kills - both accidentally and on purpose - and go before the board of Angels to explain herself. One of these times is after she is attacked by an angel, a mage and two human thugs working together. Yet no one believes her claims.

On yet another note is that someone or something is killing demons and devouring their souls, leaving behind their husk all over the Americas and Sam is the prime suspect. Gregory eventually believes her and tries to clear her name.

I've been wanting something to happen between Sam and Gregory for a while in this series, so I was very happy indeed when things progressed in this one.

I'm not going to go into any more detail but that ending has me wanting to read the next one. I need to know what happens next with Sam and co.
at Sunday, December 01, 2019