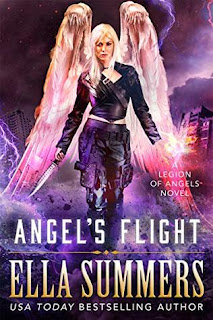 The old saying is true. Knowledge really is power, especially when angels and gods play the game.

The original Immortals, masters of magic, once reigned over every world in the known universe—until they suddenly vanished. The gods and demons have been fighting over the remains of their fractured empire ever since.

Millennia later, new angel Leda, a soldier in the gods’ army, is recuperating from her transformation. Her recovery is cut short, however, when a curse strikes New York City, a spell targeted directly at the Legion of Angels. Even as the Legion’s soldiers succumb to wrath, jealousy, and fear, the beasts on the plains of monsters are growing in numbers and power. And the longer Leda and her archangel lover Nero investigate these phenomena, the closer they come to the ancient secret that destroyed the Immortals—and that now threatens to tear the Earth apart.

This starts from where the last one left off. Leda is now an angel. Pandora, The Angel of Chaos. She is given her own territory but things never run smooth for Leda. There's a plague of issues attacking the New York City office of the Legion, making its members turn on each other and causing mayhem that eventually starts to travel further afield to the Chicago office and beyond. Initially suspecting demons, Leda and the team try to find the cause but there's nothing that stands out. Then Nerissa, the Legion doctor figures it out, taking everyone by surprise.

I don't want to spoil it by going into too much detail, you'll have to read it to see what else happens in this one.

I do enjoy reading this cast of characters. I love Leda and Nero. I've been cheering them on from their first meeting in book 1, so to see them so happy makes me want to squeal in excitement. They are the perfect bad-arse angel couple.

I cannot wait to read more of this series and this couple.
at Friday, December 20, 2019