The Boy with the Painful Tattoo - Josh Lanyon 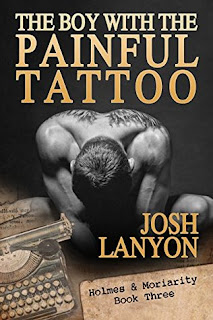 It's moving day at Chez Holmes.

Somehow, against Kit's better instincts, he and J.X. are setting up house together. But while J.X. is off at a writing conference, Kit unpacks a crate that should contain either old books or new china. It doesn't. Within the mounds of green Styrofoam popcorn is a dead body.

There goes the neighborhood

It's been a good five years or so since I read books one and two in this series and I honestly can't remember that much other than their initial hostility during that first murder in book one and them hashing things out until they ended up together and then in the second one them going through a lot of ups and downs. Oh, and the dead bodies of course.

They're now moving in together and as J.X. goes off to a writers convention, Kit stays home to unpack and ends up finding a dead body in one of the boxes. As police come to investigate, they identify the body as a wanted art thief and that's when the mystery begins. Who killed him? Who stowed his body in the van? Where are the missing coins?

Once again, things aren't the smoothest for our couple. They argue and fight about stupid things, about important things and then realise they might have been wrong and try and make things right again. It was a bit of a rollercoaster.

As for the mystery of the murder and the missing coins? I didn't see it coming but at the same time I wasn't all that caught up in it all. I was more interested in Kit and J.X's relationship.

I found Jerry rather creepy in the way he kept appearing but I won't go into too much detail about him or it will spoil it for you.

I enjoyed seeing Adrien and Jake make an appearance in this. I never read the full series - unfortunately! - only books 4 and 5 and really fell for the couple, though I soon realised they'd been through some crap so to see them happy is great.