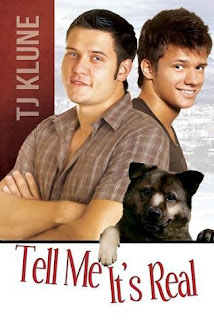 Do you believe in love at first sight?

Paul Auster doesn't. Paul doesn't believe in much at all. He’s thirty, slightly overweight, and his best features are his acerbic wit and the color commentary he provides as life passes him by. His closest friends are a two-legged dog named Wheels and a quasibipolar drag queen named Helena Handbasket. He works a dead-end job in a soul-sucking cubicle, and if his grandmother's homophobic parrot insults him one more time, Paul is going to wring its stupid neck.

Vince is everything Paul isn’t: sexy, confident, and dumber than the proverbial box of rocks. And for some reason, Vince pursues Paul relentlessly. Vince must be messing with him, because there is no way Vince could want someone like Paul.

But when Paul hits Vince with his car—in a completely unintentional if-he-died-it'd-only-be-manslaughter kind of way—he's forced to see Vince in a whole new light. The only thing stopping Paul from believing in Vince is himself—and that is one obstacle Paul can’t quite seem to overcome. But when tragedy strikes Vince's family, Paul must put aside any notions he has about himself and stand next to the man who thinks he's perfect the way he is.

Well, right from the start this had me laughing as Paul introduced himself. It was very frank and pretty much laugh-out-loud at times. He doesn't have the best opinion of himself, bless him, but he's so fun. And then he meets eyes with Vince while out at his friends drag queen performance at a bar/club and things go from there. Vince is not backing down about his intentions to date Paul, while Paul cannot believe that this younger, attractive, really nice if slightly dumb man, wants him and fights it tooth and nail.

They have a text conversation about a third of the way through the book that almost had me laughing like an idiot. The text faces that Vince was sending Paul were frigging hilarious. The Sex Face one is going to stick with me for a long time: >_<

And let's not forget Paul's parents. Oh. My. God! They are so funny it's not fair. I almost had tears streaming down my face at one point. They all go to nan's house for a meal and ignoring Johnny Depp, the homophobic parrot, they get into a conversation about how they met and it's stuff like this that has me crying with laughter at times. Vince, bless him. Not the smartest but he's a real sweetheart.


"He was choking to death in a restaurant," Vince explained

"Anyway, he would have died had I not done the haemorrhoid manoeuvre."

There were so many conversations like this, with some crazy stuff being discussed and I LOVED it! They were such a cute couple and they gelled so well. It was so obvious they truly needed each other at the time that they found each other. Paul needed to let himself be loved and Vince needed someone to be there for him after a family issue. It was amazing!

I'm going to be keeping my eye out for other books in this series.
at Tuesday, November 05, 2019