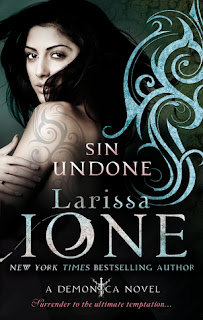 Her touch is deadly. His hunger can’t be denied.

As the only female Seminus demon ever born, master assassin Sinead Donnelly is used to being treated like an outcast. She spent decades enslaved and now vows she'll die before she'll relinquish her freedom again. Then Sin's innate ability to kill her enemies goes awry: She creates a lethal new werewolf virus that sparks a firestorm of panic and violence.

Half-werewolf, half-vampire Conall Dearghul is charged with bringing in Sin to face punishment for the plague. And she's no stranger: He's bound to her by blood and the one sexual encounter they shared has left him hungering for her raw sensuality. Worse, Sin is the underworld's most wanted and Con soon learns he's the only one who can help her . . . and that saving her life might mean sacrificing his own.

This one is Sin's - Sinead! - story, Lore(n)'s sister and the only female Seminus demon in existence.

We get to know her a lot more in this one and I feel sorry for a lot of the crap she went through. She tries to be this strong woman who can deal with everything but she doesn't want to be. So thank God for Con - who we met in Lore's book, Ecstasy Unveiled - and who Sin had sex with.

As a dhampire, a vampire/werewolf hybrid, Con is immune to the werewolf shifter virus which Sin unwittingly started in the last book and a great candidate to help start a vaccine against it by using his blood. The only downside to it is that as a dhampire, Con is susceptible to blood addiction if he drinks from the same donor too often yet he needs to keep drinking Sin's blood to fuel his resistance.

Feelings start to emerge beyond their physical attraction as the two are forced to spend so much time together and get to know each other. How he demands that she feel things instead of letting her body do it's physical pain release by bleeding. They'd both been through so much in their long lives and they deserved happiness.

They had a few ups and downs in this. Con had responsibilities within the shifter and dhampire communities and Sin was donating blood and trying to help those infected by the virus before they died and also to her assassin den.

And then let's not forget that last chapter! How cute was that with Lore? I've really fallen for this extended family. They all deserve happiness and I'm really glad they've all found it.

I'm looking forward to reading the rest of this series.
at Saturday, November 16, 2019