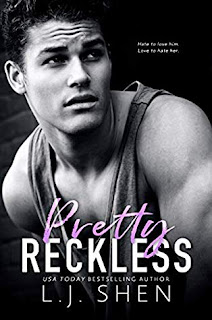 They say revenge is a dish best served cold.
I’d had four years to stew on what Daria Followhill did to me, and now my heart was completely iced.
I took her first kiss.
She took the only thing I loved.
I was poor.
She was rich.
The good thing about circumstances? They can change. Fast.
Now, I’m her parents’ latest shiny project.
Her housemate. Her tormentor. The captain of the rival football team she hates so much.
Yeah, baby girl, say it—I’m your foster brother.
There’s a price to pay for ruining the only good thing in my life, and she’s about to shell out some serious tears.
Daria Followhill thinks she is THE queen. I’m about to prove to her that she’s nothing but a spoiled princess.

Everyone loves a good old unapologetic punk.
But being a bitch? Oh, you get slammed for every snarky comment, cynical eye roll, and foot you put in your adversaries’ way.
The thing about stiletto heels is that they make a hell of a dent when you walk all over the people who try to hurt you.
In Penn Scully’s case, I pierced his heart until he bled out, then left it in a trash can on a bright summer day.
Four years ago, he asked me to save all my firsts for him.
Now he lives across the hall, and I want nothing more than to be his last everything.
His parting words when he gave me his heart were that nothing in this world is free.
Now? Now he is making me pay.

Got this from the Kindle Unlimited library.

This starts with the prologue at age 14, when Daria is at ballet practise with her rival for her mothers affection and attention, Via - a gifted but very feisty girl. It turns out she's that good that she's been accepted into a prestigious ballet school but in her jealousy Daria steals the letter and meets a boy outside a coffee shop a short distance away. A boy who wanted her to give him all her firsts. He gives her a bit of orange sea glass and rips up the letter she's holding when she tells him it's what she wants most in the world.

Fast forward four years and Daria and the boy, Penn, are now bitter rivals because of the events following the letter rip up. They come from rival schools. He's a football player, she's a cheerleader. He's poor, she's rich. They're opposites in a lot of ways and have reason to dislike each other but that initial connection from four years ago keeps rearing back up and they're drawn to each other time and time again.

I was a little undecided about our couple for quite a while. I did not find what they were doing hot and didn't understand it. But strangely, I got attached to them and wanted them to get together. I realised that they made the other one a better person, and in Daria's case, I think she needed it.

She came across as being such a bitch at times but internally she hated it, cowering away from what she'd just said and the damage she'd inflicted. I couldn't really believe that she'd done half the stuff in regards to her mum. It just seemed a step too far for me at times. Yeah, fair enough, her mum wasn't the most...loving or understanding at times, but still, it was harsh.

The romance did grow on me quite a lot, though, and by the 60% mark I was hooked on them. I wanted them to conquer everyone and everything that was thrown in their path. I cried like a baby for quite a while around the 70-75% mark, that's how invested I was in them.

There were a lot of secrets and lies going on in this and it was a little hard to keep track but I'm glad that in the end Penn and Daria got their HEA.

I'm interested in seeing how all the All Saints High parents got together as I loved that scene where they all banded together to get justice for Daria. Mess with one, mess with them all.
at Saturday, November 23, 2019