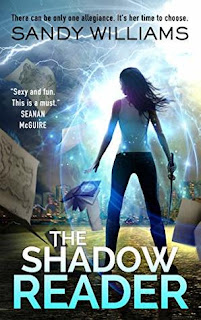 Some humans can see the fae. McKenzie Lewis can track them, reading the shadows they leave behind. But some shadows lead to danger. Others lead to lies.

A Houston college student trying to finish her degree, McKenzie has been working for the fae king for years, tracking vicious rebels who would claim the Realm. Her job isn't her only secret. For just as long, she's been in love with Kyol, the king's sword-master--and relationships between humans and fae are forbidden.

Any hope for a normal life is shattered when she's captured by Aren, the fierce and uncompromising rebel leader. He teaches her the forbidden fae language and tells her dark truths about the Court, all to persuade her to turn against the king. Time is running out, and as the fight starts to claim human lives, McKenzie has to decide once and for all whom to trust--and where she ultimately stands in the face of a cataclysmic civil war.

This starts with McKenzie doing in a test in a lecture hall at Uni, only she's interrupted mid test by her friend and love interest, Kyol--sword-master of the current Fae King. The rebels have found her and she's in danger. They run from the room but get attacked by the rebels as they try to escape. In the end, McKenzie fall into the rebels trap and ends up their captive. McKenzie keeps attempting to escape and though half of the rebels want her dead, the leader, Aren, wants her kept alive.

What follows is a complicated twisty tale of right and wrong, of realising that what you thought was the truth for so long has been twisted and put in a new light so you'll go along with it. Truths are revealed that you agree with.

There is an element of love-triangle going on in this. She's had a "thing" with Kyol for ten years: touches and kisses that are prohibited under the King's ruling of no relationships between humans and Fae. And then there's Aren. The rebel leader who steals her away and tries to convince her that the Court is using her for their own gains and not for the good of the people.

In truth I think I was more Team Aren. We got to see more of his relationship progression with McKenzie. They go from not trusting or liking each other particularly to that tender, sweet touches, stage of falling for each other. Don't get me wrong, I like Kyol. But I think because we missed the start of their relationship growth all those years ago that I don't feel as strong of a connection between them.

By the end of this I was urging our group to win the fight. And now I'm very interested in what's going to happen next with this ragtag group.