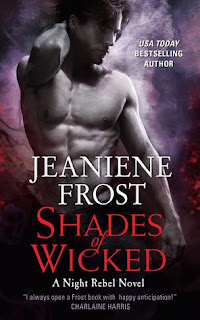 The Rule BreakerMaster vampire Ian is unrepentant, shameless…and every shade of wicked. He’s made one too many enemies in his two centuries of existence, including Dagon, a demon who now lays claim to his soul. Ian’s only chance to escape Dagon is to join forces with a Law Guardian, but he’s never been able to abide by the rules for long.

Veritas’ normal role is police, judge and jury to reprobates like Ian. But she has her own ax to grind with Dagon, so if she can use Ian as bait…well, all’s fair in law and war. As they scour supernatural hotspots to perfect their trap, Veritas soon realizes Ian’s devil-may-care, roguish image hides something much more powerful. And Ian discovers that Veritas has shocking secrets of her own. As they’re drawn to each other with a passion as intense as their peril, either love or justice will prevail. But each will have devastating consequences…

I've read some of the authors other works - several of her Night Huntress and the first of her Night Prince series' - and really enjoyed them, so when this popped up at 99p the other day I couldn't resist buying it.

I was very intrigued by how the story of these two was going to play out, how the romance would evolve and it was quite sweet actually. Ian has a way of getting under peoples defences when he drops his tough guy act and I grew to really like him, as did Veritas who ended up revealing several secrets about herself that made Ian notice her as more than a Law Guardian. It was kind of subtle but not at the same time. They were pretty good for each other.

Then we have our showdown and my heart was in my mouth for that 15% or so. I wanted them to kill him and both survive and for a time I was almost in tears thinking they might not. And then that Epilogue?! What a way to end it! I cannot wait to read the next one to see what happens next with this couple.