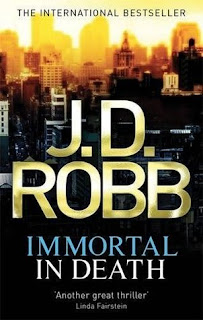 'She'd come to New York to be a cop, because she believed in order. Needed it to survive. She had taken control, had made herself into the person some anonymous social worker had named Eve Dallas'

But in a few weeks she won't just be Eve Dallas, lieutenant, homicide. She'll be Roarke's wife. But Eve's wedding plans may have to be put on hold as her private and professional lives collide...
The victim in her latest murder investigation is one of the most sought-after women in the world. A top model who would stop at nothing to get what she wanted - even another woman's man. And Eve's chief suspect is the other woman in this fatal love triangle - her best friend Mavis. Putting her job on the line to head the investigation, Eve discovers that the world of high fashion thrives on an all-consuming passion for youth and fame. One that leads from the runway to the dark underworld of New York City where drugs can fulfil any desire - for a price . . .

I read the first two books in this series quite a while ago now and the only thing I remember is Eve and Roarke's relationship progressing quite quickly.

This has taken me a long time to finish and I think that's due to its length. I'm not the biggest fan of long books and the fact the writing in the kindle app for PC is so tiny tells me it's a long one. I've been reading it in spurts between other books but as the investigation into Pandora's death got going I decided to just concentrate on this one and finally get it finished.

So Pandora is a successful model, loved the world over for her style and flair but also loathed for being vicious and cruel. When she's murdered and the prime suspect is Mavis, Eve's long time friend, Eve is determined to help solve the mystery and get her friend off the charge of murder and find the real killer.

I loved the twists and turns in this. I, like Eve, thought that they'd found the killers at about the 66% mark but then like how did they go about proving it? And then it turns out it wasn't those people?! I was like, WHAT?!

Of course, this one also contains Eve and Roarke's wedding and the stuff that leads up to it, including dress shopping, hen and stag nights and picking flowers. Admittedly, we don't get the wedding in this as such, just Eve getting dressed and walking out to make her promise to Roarke.

Although I didn't enjoy this as much as previous books, I think that was down to me not being in the mood for a mystery/crime/romantic suspense book as well as it's long length. Nevertheless I will be reading more books in the series at a later date.
at Monday, October 14, 2019