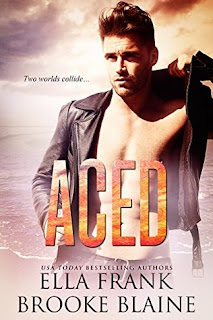 Ace Locke is Hollywood’s hottest action hero. Women across the globe fling their panties in his direction, but Ace isn’t interested in those—he’s more of a boxer briefs kind of guy. Specifically, those of the nearly naked male model on a billboard he drives past every day.

Though he recently made headlines for his public coming out, Ace is wary about pursuing a relationship, fearing what the court of public opinion will do to his career. But there’s something in the model’s expression that intrigues him and has him wondering what if?

Dylan Prescott just scored his biggest modeling campaign yet. One that has him plastered all over L.A. in not much more than what he was born with. And when he’s cast in Ace’s latest blockbuster, it puts him in close proximity to his ultimate fantasy.

Outwardly confident, Dylan has no problem with his sexuality or his pretty-boy looks, and uses both to his advantage to get what he wants. And what he wants is the impossible—Ace Locke.


What happens when these two worlds collide?

Note: I'm sorry to say that work has been cutting into my reading time this week. I keep getting the odd chapter read here and there but it's not been enough time to get really stuck in with this one.

It's been a good few months since I last read a MM Romance, so I have my fingers crossed that I really enjoy this one.

This one starts with Ace admiring a billboard for what must be the hundredth time of a guy he fantasises about every night, stopping traffic in the process as he heads off to the reading of his new film. It just so happens that the guy from the billboard is sitting in on the reading and is going to have a part in the film. There is an instant attraction between the two and though Ace tries to fight it, he can't help but be drawn to the confident Dylan.

What follows is some hot man on man action and a cute romance between the recently out-of-the-closet-but-too-afraid-to-find-anyone actor and the confident model who's trying his hand at acting. They are pretty perfect for each other.

But Ace is wary of trying to find someone when he's so publically in the spotlight as he knows they'll be hounded by the press and every dirty secret they may have will be aired to the world. And since this is a series, of course that very thing happens right before the book ends, so I'm intrigued about future books but I'm not in a hurry to go and buy it.

We get alternating viewpoints in this, which admittedly gets a little confusing at times with them both being men and trying to remember whose VP you've just read.

I did like that Tate and Logan--characters out of one of the authors (Ella Franks) other books--made a little cameo in this. I haven't read any of Brooke Blaine's other works but this is a crossover series featuring characters from L.A. Liaisons.