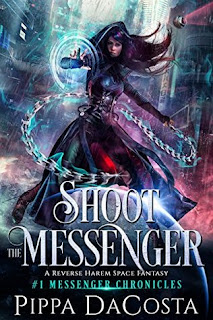 "Lies aren't her only weapons against the fae..."

In the Halow system, one of Earth’s three sister star systems, tek and magic—humans and the fae—are at war.

Kesh Lasota is a ghost in the machine. Invisible to tek, she’s hired by the criminal underworld to carry illegal messages through the Halow system. But when one of those messages kills its recipient, Kesh finds herself on the run with a bounty on her head and a quick-witted marshal on her tail.

Proving her innocence should be straightforward—until a warfae steals the evidence she needs. The fae haven’t been seen in Halow in over a thousand years. And this one—a brutally efficient killer able to wield tek—should not exist. But neither should Kesh.

As Kesh’s carefully crafted lie of a life crumbles around her, she knows remaining invisible is no longer an option. To hunt the fae, to stop him from destroying a thousand-year-long fragile peace, she must resurrect the horrors of her past.

Kesh Lasota was a ghost. Now she’s back, and there’s only one thing she knows for certain. Nobody shoots the messenger and gets away with it.

A new space fantasy series where the guys are hot, the perils are many, and one rebel messenger holds the key to the survival of the human race.

After finishing Betrayal by Pippa DaCosta the other day, I had an urge to read more so I went hunting for more of her books and found this one cheap and sounding rather interesting.

It starts with a bang--quite literally--as Kesh works as a Messenger, delivering a message to someone telling him he has 30 seconds to live. It doesn't go down well, as you can imagine, and all hell breaks loose as a bullet is fired and he does end up dead, with people thinking Kesh killed him. She uses her bot helper to figure out where the shooter shot from and heads up to investigate to find the weapon--one modified for fae use. The fae appears a few seconds later and threatens her, taking her bot with him and then what follows is very interesting.

I pretty much read half of this in one sitting. I did not want to put it down at all. I became very invested in Kesh's journey in trying to clear her name to then infiltrating the company Arcon to then being able to overcome her...illness? and beat the bad guy.

I found the reverse harem side of this very interesting. Kellee, the Marshal. Talen, the fae. It was slow building but I got very invested in the trio. What's going to happen next after that revelation near the end?

It's really hard to write a fitting review without giving spoilers away! I'm looking forward to the next book in the series.
at Monday, September 16, 2019