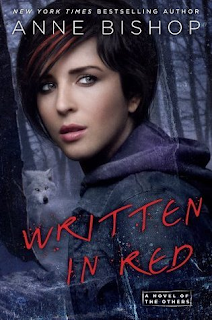 As a cassandra sangue, or blood prophet, Meg Corbyn can see the future when her skin is cut—a gift that feels more like a curse. Meg’s Controller keeps her enslaved so he can have full access to her visions. But when she escapes, the only safe place Meg can hide is at the Lakeside Courtyard—a business district operated by the Others.

Shape-shifter Simon Wolfgard is reluctant to hire the stranger who inquires about the Human Liaison job. First, he senses she’s keeping a secret, and second, she doesn’t smell like human prey. Yet a stronger instinct propels him to give Meg the job. And when he learns the truth about Meg and that she’s wanted by the government, he’ll have to decide if she’s worth the fight between humans and the Others that will surely follow.

Well I thought this one started on a bit of intrigue. Where had Meg come from? What were these scars she had? How had she so new to...life?

I found this really hard to put down, if I'm honest, the story really pulled me in and despite there not being much of a romance, I'll admit I was hooked. I loved the innocence of Meg and her just being really nice to everyone, which equally confused them and made them want to protect her. It was nice seeing them turn from scary "other" beings to  almost friendly. Especially with Meg. She became one of them. Part of their family.

Despite its lack of romance--I can't decide if something may happen between Meg and Simon in the future--I enjoyed this. It had a few elements of horror style things in--at the beginning and towards the end some trespassers are eaten alive and then some detailed snow related deaths towards the end--but although I didn't enjoy that bit so much, I forgot about it quickly enough.

I loved how every species of other in the Courtyard had their own little traits. The Crows with the "shiny". The wolves with their "arroooo" greetings. Tess with her living hair. The Hawks and their love of rats and mice. The elementals and their horses.

It was really well thought out and though it was almost 500 kindle pages long, I didn't lose interest once.

I'm interested enough in this group of characters to carry on the series. I even read the excerpt for the next book and it HAS given me hope for something more between Meg and Simon so I will be buying the next book at some point in the future.