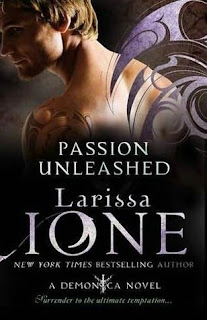 Serena Kelley is an archaeologist and treasure hunter - and a woman with a secret. Since she was seven, she's been keeper of a powerful charm that grants her health and immortality...as long as she stays a virgin. But Serena isn't all that innocent. And when a dangerously handsome stranger brings her to the brink of ecstasy, she wonders if she's finally met the one man she cannot resist.

Wraith is a Seminus demon with a death wish. But when an old enemy poisons him, he must find Serena and persuade her to give him the only known antidote in the universe - her charm. Yet, as she begins to surrender to his seductions and Wraith senses the cure is within his grasp, he realises a horrible truth: he's falling for the woman whose life he must take in order to save his own.

I read book 1 (Pleasure Unbound) and book 2 (Desire Unchained) not that long ago and got really invested in this group of brothers and their friends.

Like the others before, this one starts with some action. Wraith is hunting gang members that belong to a vampire led gang when he gets poisoned by a mysterious someone. And it seems he can't be healed unless he sleeps with a certain virgin with Aegis connections who holds a charm that can save his life. Of course, there's a downside to that--Serena will die without it.

I liked how Wraith changed in this. He's gone from some rather self destructive guy, who holds himself back from everyone, to one who starts to soften and admit he cares for people. We see his insecurities and his fears and I started to feel for him. To truly like him. He's not had the greatest life, not until he met his brothers anyway.

I loved the globe-trotting aspect to this one with Serena's Tomb Raider type skills. We spend a while in Egypt as she looks for two artefacts that the Aegis are hoping will stop the unrest in the demon population and Sheoul.

Gem and Kynan's romance returns in this one--after his disappearance at the end of the last book--and I have been eating it up! It's been three books brewing now, so it's about time they finally got together. Of course, nothing ever goes smoothly and for several pages I wanted to cry.

And what do you know? Another sibling pops up in this one, and it appears his story is next in the series. I don't know if I'll be going straight into book 4 or take a break now that the original trio have found their special someone.
at Thursday, August 22, 2019