Miss Me Not - Tiffany King 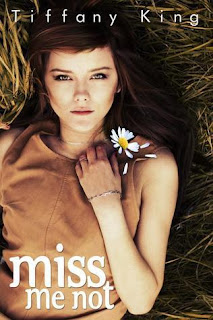 Miss Me Not is a beautiful story of self-discovery, forgiveness, caring, and love.

Madison Hanson's past demons have given her a shadow of an existence with little hope. With the sudden tragic death of a fellow student, Madison questions her own life choices, and is now forced to evaluate everything she thought she believed in. When fate intervenes and partners her with Dean Jackson, a popular "all around good guy" from school, Madison gets a glimpse of a life that is filled with sunshine that has the power to break through the darkness she has cloaked herself in.
With Dean's help, Madison discovers a desire to finally step out of the shadows, and embrace life and all its gifts.


Note: This has been on my Kindle for years--literally! I've decided every so often when there's not a book I've bought that I'm just dying to read that I'll start reading my backlog of books from the earliest bought. This was #1 - from 2013. I'm not doing bad, I only have one more book from 2013 before I start the ones from 2014. Yay!

This covers some rather dark topics like suicide and physical abuse. On the first page we learn of a student's suicide and Madison's feelings about it. And then the fact that she has a sort of suicide pact with her only friend. It's quite a punch to the gut that these 17 year olds feel so low due to family situations that they want to end things.

Madison had a very unconventional childhood with parents who took no notice of her at all and in an effort to gain any sort of attention from them she acted out in the past until the unthinkable happened when she was just 13. I understand how stuff like that can warp you when it happens at such a young age.

Then a ray of light appears in the form of Dean--all round good guy. He's been asked to tutor her so she doesn't flunk a class. He's determined to be her friend after watching her for years and seeing her "fade into the background" behaviour. Things progress from friendship into romance over time and we get a rather sweet romance between Dean and Madison. He's very protective of her.

Of course, things don't always go the way you want and someone close to Madison commits suicide throwing her back into the darkness of grief. Luckily, she now has a strong support system in place with Dean and his family and they manage to keep her grounded.

I thought it ended a little abruptly but it was a sweet young adult romance that covered some hard hitting topics.

Another note: Suicide does seem to be a big issue in teenagers around the world and this book does a good job of highlighting it. It doesn't seem fair to me for teens to be that low that they take their own lives. They've barely started living and they ready to die already? That's not right. I've had a few good cries while reading this.
at Thursday, August 15, 2019