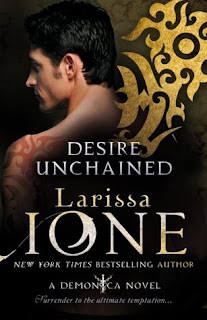 Runa Wagner never meant to fall in love with the sexy stranger but she couldn't resist the unbelievable passion that burned between them...a passion that died when she discovered his betrayal and found herself forever changed. Now, determined to make Shade pay for the transformation that haunts her, Runa searches for him - but ends up prisoner to his darkest enemy.

A Seminus demon with a love-curse that threatens him with eternal torment, Shade hoped he'd seen the last of Runa and her irresistible charm. But when he wakes up in a dank dungeon chained next to a mysteriously powerful Runa, he realises that her effect on him is more dangerous than ever. As their captor casts a spell that binds them as lifemates, Shade and Runa must fight for their lives and their hearts - or succumb to a madmans evil plans.

Since I enjoyed Pleasure Unbound so much I thought I'd go straight into book 2 and read Shade's (Eidolon's brothers) story.

My hours at work have doubled recently so I'm not getting as much reading time in so it's taken me a while to finish this but I enjoyed it as much as the previous.

I grew to like Shade quite a lot in the first, he was very protective of his family and I was interested in who was going to be that special woman in his life. Once again, though, it isn't straight forward. Runa despises him after what ended up happening to her but you could see a connection still there between them as they share their prison cell.

I was very intrigued as to who had taken Shade, Runa and whoever else was in that cellar, hostage and the answer blew me away. I was not expecting that. They escape but not before getting mated and then the journey of their relationship really plays out.

The story arc that started in the first with Gem and Kynan continues in this one. It ratcheted up a few notches and I am interested to see where that goes. And of course, I want to see who the special lady is that brings Wraith to his knees.

Ordered book 3 and 4 so I can finish the series but not arrived yet. Can't wait to read more!