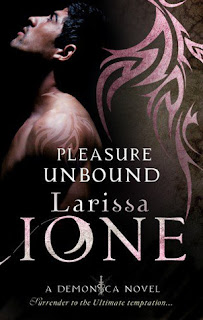 Tayla Mancuso is a demon-slayer who hungers for sensual pleasure - but fears it will always be denied her. Until she lands in a hospital run by demons in disguise, and the head doctor, Eidolon, makes her body burn with unshakable desire. But to prove her ultimate loyalty to her peers, she must betray the surgeon who saved her life.

Eidolon cannot resist the fiery, dangerous woman who fills him with both rage and passion. Not only is she his avowed enemy but she could very well be the hunter who has been preying upon his people. Torn between his need for the truth and his quest to find his perfect mate before a horrific transformation claims him for ever, Eidolon will dare the unthinkable - and let Tayla possess him, body and soul...


Admittedly it's been a while since I read and enjoyed a paranormal romance but since that's what 75% of my paperbacks are at the minute, I decided to try this series.

And I was pulled in fairly quickly. It was straight into the action at Eidolon's demonic underground hospital in New York dealing with injuries and his brothers. And Tayla--an Aegis, the demons mortal enemy--ends up being one of his patients.

Within the first 25 pages we had a rather steamy sex scene and though I was surprised by the enemies turned lovers actions, I was intrigued on what would end up happening. Would she betray the Aegis for him? Would he defend her against all the demons who wanted her dead?

It was pretty non stop with stuff going on. It wasn't always just from Eidolon and Tayla's POV. We saw the odd scene from someone related to the hospital who was being hunted by the Aegis and I was very anti-Aegis from pretty early on.

This was a quote from early on in the book but I found it accurate and rather sweet. The romance was rocky, one minute they were all over each other and the next trying to kill each other--literally. I actually really liked the turmoil, the angst, and devoured the book in about two days when I finally just sat down and started it properly.

There is a story arc starting in this one that involves Gem, a half demon, and her want of Kynan, a human, that we see playing out in the occasional scene that has me intrigued and I'm looking forward to seeing how that plays out in the next book.

I have book 2, Desire Unchained, and book 5, Sin Undone, in paperback, too, and look forward to reading them.